Back from Christmas break and I was ready to dive back into my algebra 1 class. The last time we were really together (before midterms, winter break, and winterm) was about a month ago! AH!

Before we left, we were working on linear equations. Today I decided that I wanted to review graphing linear equations from slope-intercept, point-slope, and standard form. Instead of having my students do a worksheet or Delta Math I decided to make the day a little more interesting. For my class of 11, I used tape to create 5 coordinate planes on the ground. Everyone had a partner and there was one group of three. I had my students numbers their axises while I passed out material for the rest of class. Each group also had one whiteboard and one marker. 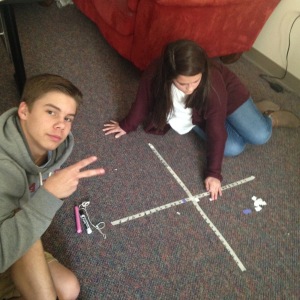 I handed each group a hand full of tiny paper squares. I created my squares by cutting up a laminated piece of white paper. In the mix of squares, there were also a few blue squares. My students also received a piece of string.

After the materials were passed out, I posted an equation on the board in slope-intercept form. Together, we identified the y-intercept and placed the blue square on that point. Students then used  the slope to find the other points on that line. They marked their points with the white squares. Next, students placed their string through the points they created on their graphs. Placing the string through the points helped students see if they made a mistake while graphing. 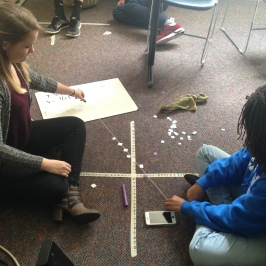 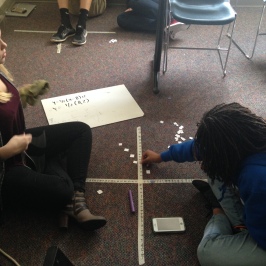 For the rest of class, I would place one equation on the board at a time and students would graph their equation. We practice graphing in slope-intercept and then moved to standard and point-slope form. Students used their white boards to change their equations from standard to slope-intercept form. When we got to point-slope form I had students identify the slope and point on their white board before graphing.

I LOVED having students work on their own coordinate plane on the floor. I could walk around and see exactly where students were struggling and could help them right away. I had students mark their intercepts with the blue squares so they could visually see the intercepts. I liked using the squares to mark the different points on the line. If students made a mistake they could easily fix it. I think my students also liked being able to physically plot all of the points and place the string down to create the line. This was a pretty fun review after winter break and a great way for me to assess my students understandings. 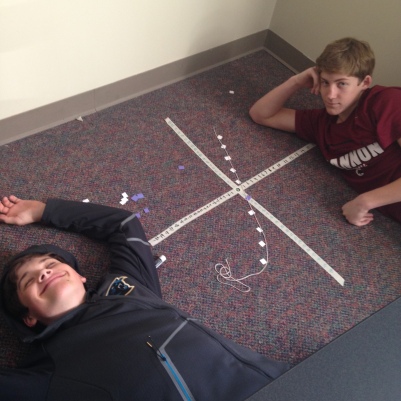