After reading Sarah Hagan’s post on Snowball Fights, I knew I wanted to try it out in my Algebra 1 class. We are currently finishing up our chapter on solving systems of equations. Although my students have learned how to solve by elimination and substitution, they have not been put in a situation where they had to choose which method to use. I thought this would be the perfect opportunity.

To prep, I created sheets of paper with a system of equations written on it. There were also three boxes, for elimination, substitution, and checking. 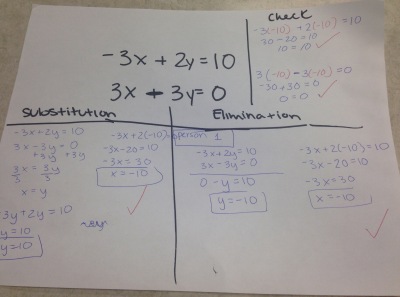 I handed out pieces of paper to each student and told to crumbled the paper into a ball. I told them that we were going to have a snowball fight. However, there were basic rules to follow.

Things I had to add to my rules during class:

“Substitution is soooo much easier in this problem!! Why do I have to do elimination?!”

I love when students ask “why?!” They were curious, and that’s when learning really starts.

This brought up a great discussion question. Why do we use a particular method to solve systems of equations? Is there one method that is ALWAYS easier to use.

Instead of leading this discussion, I decided to have my students explain to their peers why one method works better for certain problems.

When every student finished we placed their work around the room. Every student then described the method they used and WHY it was the best way for their problem. 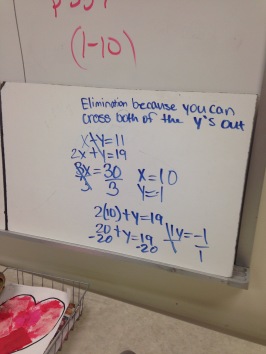 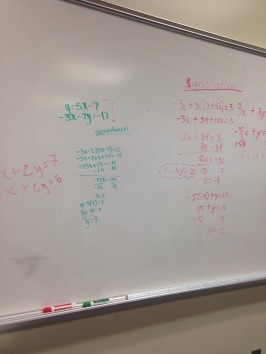 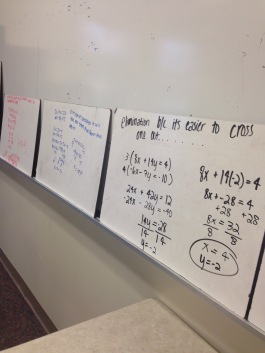 We had some time left at the end of class and my students wanted to have another snowball fight. For this snowball fight, I had them create their own problems.  When it came time to solve the snowballs, students could choice any method they wanted as long as they could explain WHY they chose it.

Overall, this was a pretty fun class. Snowball fights can get a little hectic, but I’m glad  I tried it out .